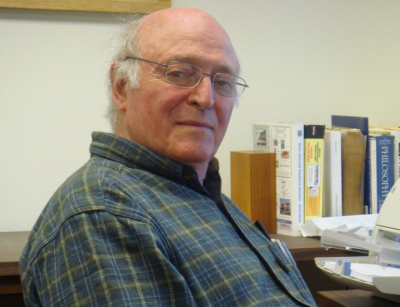 The Department of Philosophy is sad to announce that professor emeritus David H. Sanford has passed away.

A Duke faculty member since 1970, Sanford earned his Ph.D. from Cornell in 1966 and previously taught at Dartmouth College. He was widely known in the field for his work on causation and inference in "If P, Then Q: Conditionals and the Foundations of Reasoning," first published in 1989. He also wrote on induction, the logic of vagueness, among other things.

Memorial posts at Daily Nous and Leiter Reports contain reflections from across the philosophy world, and some of Sanford's Duke colleagues offer memories below.

He was a wonderful colleague, both erudite and witty, and his questions after professional presentations to the department were often a marvel to behold, genuine stem winders that captivated us.

David H. Sanford was a beloved member of the Duke department, which he chaired at several different times. David was a specialist in metaphysics, epistemology and philosophical logic. David kept beautiful and meticulous grade books for all his classes, which he would proudly retrieve when a former Duke graduate come up in conversation.

David was personally shy and reticent, but with a wicked sense of humor. At colloquia David perfected a work around to our one question rule: he would simple announce that he had a three part question!

David was erudite beyond the knowledge of the most educated philosopher. He was also the soul of wit — one liners, aperçus, Bonne mots, with a drollness in expression that made the most well-placed, well-deserved barb painless.

He was a great philosopher, whose greatness it took being a philosopher to recognize. I dedicated a book to him. In the dedication I called him "philosophy’s philosopher" (in Greek, to make it look classical).

He was present at the creation of a period of flourishing in our department and defended the intellectual integrity of our discipline when it was under threat.

He was an intellectual influence on me for 50 years, long before I came to Duke, and he was a judicious critic whenever I needed it.

He was a great friend, whose company many sought.

I knew and interacted both philosophically and socially with David for many years. We must have spent hundreds of hours talking about philosophy over the course of our lives, and he and Anne and my wife Lisette met for restaurant meals fairly frequently in the early teens of this century.

(Lisette first met David long before we had even a temporary home in the Triangle. It may even have been before we moved to South Bend. The mid-nineties, I think. We  were visiting a cousin of Lisette's who in those days commanded the Duke ROTC program. David heard that I was in town and when he discovered that my wife was with me, he kindly showed us around Duke Gardens.)

And let's see . . . David and I once had what diplomats call a free and frank exchange of views in print — see his "The Problem of the Many, Many Composition Questions, and Naive Mereology," and my reply, "Naive Mereology, Admissible Valuations, and Other Matters," both in "Noûs," 1993. Very dry and technical, and of interest to perhaps a hundred people in the world. And, of course, neither author was willing to give an inch at any point. (There was one other exchange — much the same sort of thing.)

Our philosophical discussions and letters were invariably dry, technical, etc. (Although I do remember sitting in my Syracuse University office during one dark afternoon in early February and reading a letter from David. My office had a huge window that ordinarily afforded a fine view of the campus. But on that day I could hardly see any of the other university buildings for the blowing snow. I was coming to the end of the typed part of David's letter — the dry, technical part. Beneath his signature, there was a neat inscription in longhand: "Crocuses are up.")

The odd thing is, I haven't any anecdotes about David — unless "Crocuses are up" counts as an anecdote. Our conversations were all technical philosophy — perhaps eked out with a little professional gossip. I can remember only one thing that David said to me that wasn't either this kind of thing:

"Look, if you're at a complete loss about how to supply a reason for saying that a simple is caught up in the life of Jimmy Carter, it's not going to help you to have continuum-many alternatives to 0 and 1."

or this kind of thing:

"Fred Dretske will be joining us at Duke next year."

"I took a course in chemistry at Oberlin, and there was this kid in the class, fourteen years old, maybe, a faculty brat. He always knew the answer to every question, even when the rest of us were stumped. His name was David Lewis."

I am very sorry to hear of David Sanford‘s passing. Duke has lost an outstanding faculty member. I remember my interactions with David when I was dean of arts and sciences. He was a real gentleman and scholar, and an excellent university citizen. We will all miss him as a valued colleague and friend.