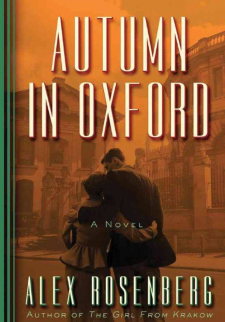 Rosenberg, author of The Girl from Krakow, lived in Britain and taught at Oxford where he made the acquaintance of some of the historical figures that play roles in his new novel.

After being blacklisted for having communist sympathies as a student twenty years before, Pulitzer Prize-winning historian Tom Wrought escapes America’s Cold War climate to teach at Oxford. There, he falls in love with Liz Spencer, a beautiful married woman. When Liz’s husband is pushed in front of a train in the London Underground, Tom is immediately arrested for the murder. Scotland Yard is convinced it has its man, as he had means, motive, and opportunity.

Certain of his innocence, Liz hires a young solicitor, Alice Silverstone, to defend Tom. But they discover that Tom’s former secret work as an American spy made him a number of powerful enemies. Russian intelligence, British counterespionage, and even the FBI all may have reason to frame him. If Liz and Alice can find out who is behind the murder, they stand a chance of freeing Tom, but doing so puts all their lives at risk.